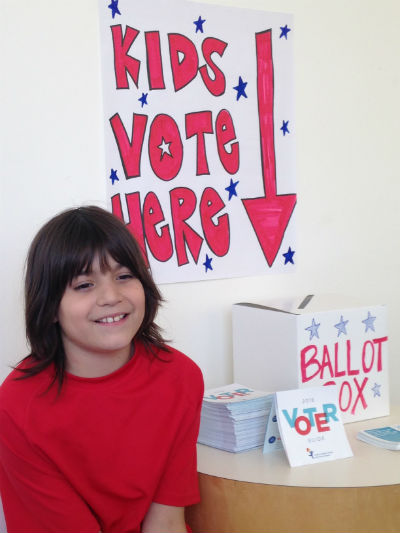 Children’s Hospital Colorado patients have voted, and 91% of them are in favor of increasing the tobacco tax. Of the 360 ballots cast by both inpatient and outpatient children and youth over the past week, 326 were in favor of charging more for cigarettes, while only 34 were opposed.

10-year-old Salvador Ramos was thrilled to represent all the kids at Children’s Hospital Colorado to announce the results of the KidsVote. Ramos has asthma and knows that second-hand smoke makes him really sick. When asked how he felt about taxing tobacco, he said, “I think smoking is very bad for you, and 91% of children at Children’s Hospital Colorado agree with me. Vote yes for Amendment 72.”

Specifically, the ballots asked, “Smoking is dangerous. Do you think we should help keep kids from starting to smoke? Cigarettes cause cancer and heart disease. Kids in Colorado smoke seven million packs of cigarettes every year. We know if the state of Colorado charges more when people buy cigarettes, it helps to keep kids from starting to smoke. With the extra money, our state could help give more people the health care they need. Do you think we should charge more?” 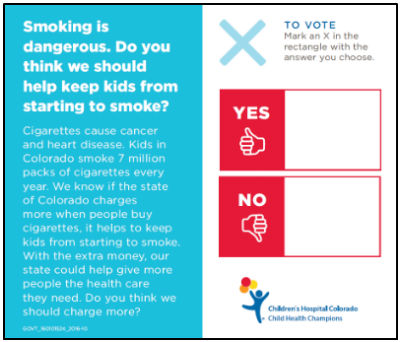 What Amendment 72 will do for Colorado

Children’s Colorado is one of the more than 100 organizations and leaders supporting the “YES on 72” campaign. If passed, the amendment will increase taxes on cigarettes sold within the state in order to raise money for critical unmet health needs for all Coloradans. According to the campaign, the proposed $1.75 tax increase will prevent more than 34,000 kids from becoming smokers, save more than 20,000 lives and save more than $1.4 billion in future health care costs.

“More than 10% of children in Colorado smoke, and every year, more than 5,000 Coloradans—most of whom started smoking as teenagers—die from tobacco-related illnesses,” said Heidi Baskfield, J.D., Children’s Colorado’s executive director of advocacy. “We know that one of the most effective ways to discourage young people from starting to smoke is to increase the price of tobacco products. This is one of the most important steps we can take in Colorado to improve health and fight the number one cause of preventable death in our state.”