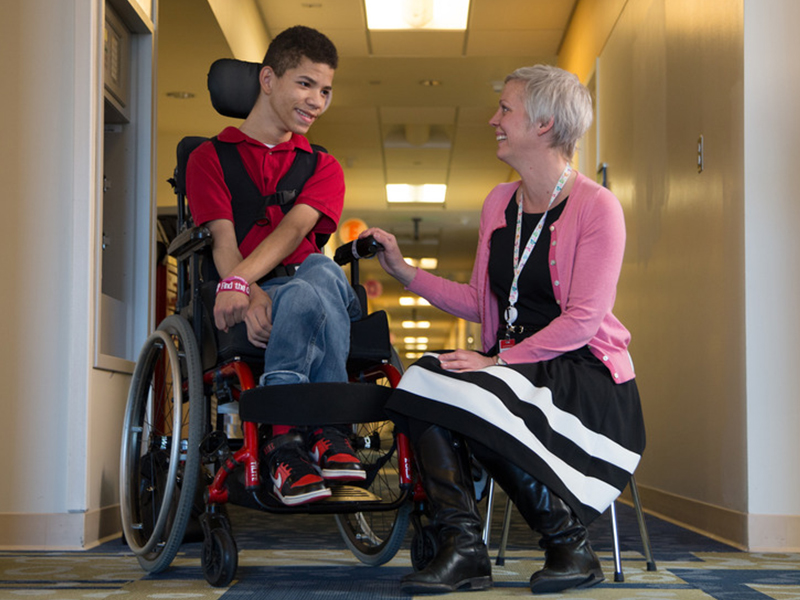 Djimon Hill’s right arm was so out of control that his family had to physically tie it down. Sometimes they’d pin it beneath the tray on his wheelchair, where all day it would strain to get out.

Erika Cannely, Djimon’s aunt and co-guardian, gives the arm a playful pat. “We call it Bob,” she says. “It’s got a mind of it’s own.”

And in a way, it does: Djimon suffers from secondary dystonia, a kind of crossing of wires in the basal ganglia, the brain’s center for voluntary movement.

It’s the result of oxygen deprivation at birth. Djimon’s heart stopped while he was still in the birth canal and took four minutes to get going again; Djimon was born struggling to control his movements. Muscles don’t relax or contract as they should. His legs won’t support him; he has to fight his own limbs. He eats constantly, but due to the calorie burn of his overtaxed muscles, has trouble putting on weight.

Ironically, the muscles themselves work perfectly well. In fact, kids with dystonia are often very strong.

“He’s got some big guns right here,” Erika jokes. “We’re dressing him, we’re fighting him. It’s a fight just to straighten out his arm. Lately, it’s been easier.”

Basically a set of electrodes implanted deep in the movement centers of the brain, DBS has been a proven treatment for Parkinson’s disease, another impairment of the basal ganglia. However, it has a dicier track record in dystonia patients, who are often kids.

Led by neurosurgeon Aviva Abosch, MD, and supported by ongoing research combining brain imaging and clinical data, the Pediatric DBS Program at Children’s Hospital Colorado seeks to maximize the benefits of pediatric DBS by analyzing who it works best for and why. It’s the only pediatric-specific DBS program in the region and one of just a handful in the United States. Djimon was the program’s first candidate. There was no guarantee that the procedure would work.

But it was a chance.

“I wanted him to do it,” says Daevion Hill, Djimon’s younger brother, best friend and de facto interpreter since he was old enough to talk — Erika calls him “the Djimon Whisperer.”

“We went to the appointment where Dr. Abosch explained everything, and she didn’t pull any punches,” Erika recalls. “I was scared. But on the way out, I heard Daevion tell Djimon, ‘Do it! Do it!’”

The process would involve two operations: one to implant the electrodes and another to route wires via Djimon’s neck to a controller in his chest. Children’s Colorado Pediatric Neurologist and Movement Disorder Specialist Abbie Collins, MD, now uses that controller to remotely program voltage levels for optimal effect, a process Djimon goes through every three months.

Further programming has yielded steady improvement, and Djimon’s family is hopeful that he may soon be able to push his own wheelchair, maybe even walk.

Djimon is even more hopeful: one day, he’d like to drive.

What kind of car? Djimon grins, and the response comes through Daevion with a wry smile. “Any car.”

“I read the other day they made a car for a man with no arms or legs,” says Erika. “I was like, see, Djimon? Keep dreaming.”