Mathew: How the Diagnosis of an Extra X Chromosome Helped Mathew Find Himself 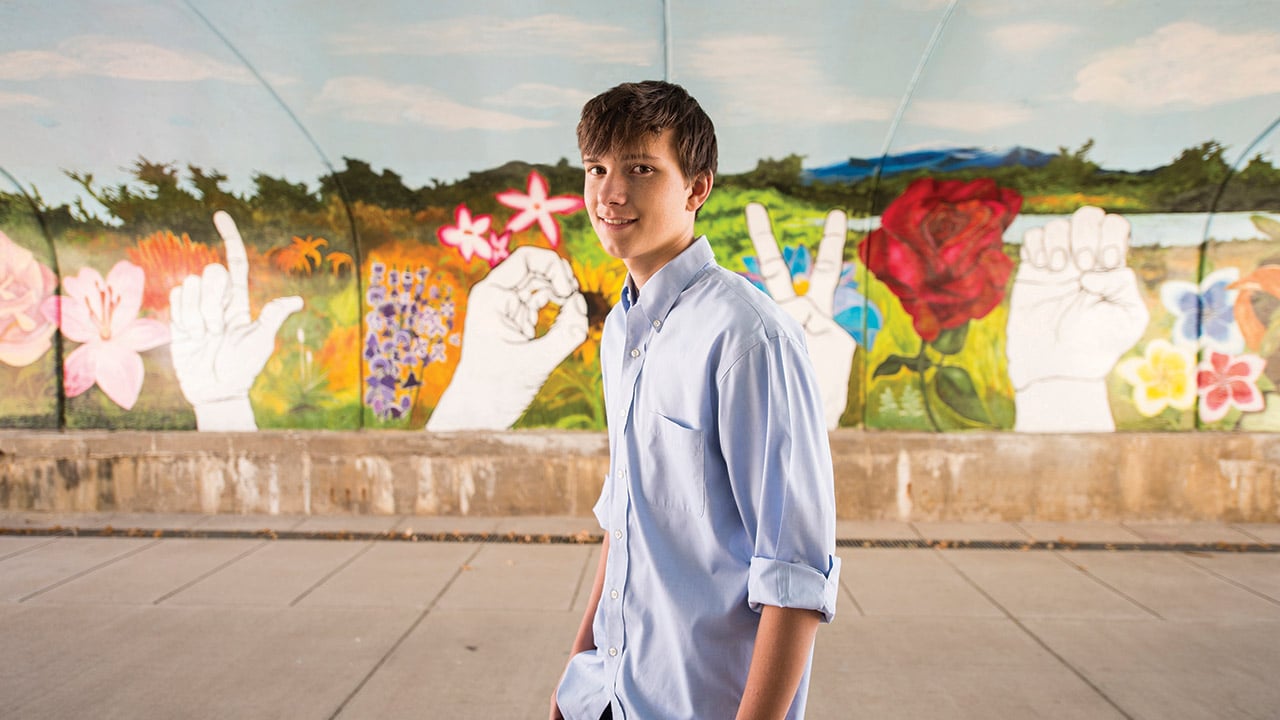 In a tunnel beneath Willow Park Drive in Parker, Colorado, along the Sulphur Gulch Trail, a series of five-foot tall painted hands spells out “L-O-V-E O-T-H-E-R-S” in American Sign Language against a deep, vivid backdrop of flowers: roses, daisies, lilies, lupines. It’s the vision of 16-year-old artist Mathew Fasone, who painted it with the help of a well-coordinated group of volunteers over the course of about 223 man-hours in the summer of 2016.

“I’ve always liked tedious things that take a long time,” Mathew says. “I just think way too much, 24/7. It helps me clear my mind.”

That pattern of racing thoughts probably has to do with Mathew’s Klinefelter syndrome, or XXY, the result of an extra X chromosome in his genetic makeup. Affecting about one in every 500 to 1,000 males, the syndrome can manifest in symptoms from hormone deficiencies to learning delays. Since he was very young, Mathew has struggled with speech and auditory processing, as well as dyslexia, attention deficit issues, and bouts with depression and anxiety.

“He had gotten all these labels that didn’t make sense and people couldn’t put together,” Susan, his mother, recalls. “He felt very weird and alone.”

Mathew’s pediatrician began to suspect Klinefelter when Mathew was 15. Mathew didn’t know it then, but the first and foremost clinic in the nation dedicated exclusively to children with his diagnosis was right in his backyard.

“Here, we care for kids with sex chromosome aneuploidies from all over the country,” says Shanlee Davis, MD, a pediatric endocrinologist with the eXtraordinarY Kids Clinic at Children’s Hospital Colorado. “Currently there’s no other place with this extensive interdisciplinary expertise.”

The eXtraordinarY Kids Clinic, launched 10 years ago by Founder and Director Nicole Tartaglia, MD, combines endocrinologists, speech and occupational therapists, psychologists and a genetic counselor to treat every aspect of sex chromosomal aneuploidies in children. For many years, it was the only clinic of its kind.

For Mathew and his parents, the team’s comprehensive evaluation of Mathew — and the way providers like Drs. Davis and Tartaglia explained it — connected his learning and emotional challenges to XXY in a way that finally made sense. An accomplished artist at 16, a high achiever and an Eagle Scout, Mathew has never been one to take his challenges lying down — but the tools to address them head-on have gone a long way toward helping Mathew overcome them.

He’s paying that gift of understanding forward: Almost immediately he enrolled in a study that examines cardiometabolic function in boys with XXY toward an increased understanding of the syndrome’s heightened risk of type 2 diabetes, one of the many aspects of aneuploidy the clinic investigates.

Setting the stage for clinics to help kids around the country

Meanwhile, the structure and success of the clinic itself is guiding the modeling of similar clinics nationally. With support from AXYS, a network of families and professionals dealing with aneuploidies, clinics based on the eXtraordinarY Kids model are slowly opening at other children’s hospitals throughout the country.

“Participating in the clinic has made Mathew feel more self-empowered,” Susan says. “He has a better idea of who he is and why he is the way he is.”

It’s safe to say Mathew is doing exactly that.