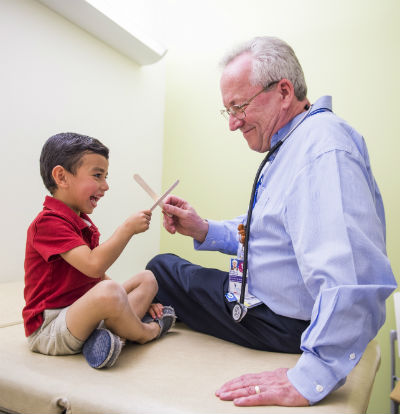 Contrary to past information, a new study conducted by Dr. Stanley Szefler, Director of the Pediatric Asthma Research Program, shows that combining long-acting beta agonists (LABAs) with an inhaled steroid drug for childhood asthma did not have any greater risk of harm than children using an inhaler with only one steroid.

"This should be reassuring information to physicians if they're in a circumstance where the medication could be of benefit to their patients,” says Dr. Szefler.

What are LABAs and why the previous concern?

LABAs provide short-term relief of asthma symptoms by relaxing and opening the airways.

Apprehensions about LABAs came from a 2008 analysis by the U.S. Food and Drug Administration which had questioned their safety because some studies had shown an increased risk of asthma-related deaths in adults and asthma-related hospitalizations in children.

According to Dr. Szefler, “The past safety concerns might have cropped up because patients were using an LABA without also taking a steroid alongside it. LABAs provide only short-term relief, and do nothing to treat the chronic airway inflammation targeted by steroids.”

Whatever the cause, this analysis resulted in the FDA placing a warning label on the drug, listing that it could cause serious to life-threatening risks for patients.

Removing the box-warning on LABAs

Luckily Dr. Szefler’s new clinical trial results have been forwarded to the FDA, which now will decide whether to lift the black box warning.

This would help reassure families whose children could benefit from LABAs and get physicians back to prescribing them. "I think most clinicians have not been concerned, but there were probably a proportion of physicians not prescribing long-acting beta agonists because of [family's] concerns," noted Dr. Szefler.

Read the full articles to learn more about the clinical trial on HealthDay and MedPage Today.

Stanley Szefler, MD, has been the Director of Pediatric Asthma Research in the Breathing Institute at Children’s Hospital Colorado since 2013. Before joining Children’s Colorado, Dr. Szefler served as the Head of the Division of Pediatric Clinical Pharmacology at National Jewish Health as well as Director of the Pediatric Clinical Trials Center there. Dr. Szefler has published more than 400 scientific articles and co-edited books on severe asthma, childhood asthma and pediatric allergy and immunology. Dr. Szefler’s dedication to pediatric asthma research brought him to Children's Hospital Colorado where he continues to work on his commitment to new treatment and therapies to improve the care for children with asthma here and around the world.