Read entire case study Published in the May 16, 2017 issue of the American Journal of Gastroenterology

Eosinophilic esophagitis (EoE), the chronic inflammation of the esophagus that is caused by food allergies, can cause food impaction and esophageal stricture.

Studies have shown that stricture may be inevitable after years of chronic, untreated inflammation. Up to 67% of adult EoE patients and 16% of pediatric patients have fibrostenotic features (circumferential rings of the esophagus or esophageal stricture).

While treatment can minimize fibrostenosis, detection and treatment of EoE in children could improve outcomes and decrease the severity of fibrostenotic disease in adulthood.

The EndoFLIP, already used in gastroesophageal reflux and bariatric surgery patients, determines the pressure–geometry relationship – or distensibility – of hollow gastrointestinal organs, including the esophagus.

The tool had previously provided valuable information when used in evaluating adults with EoE, finding that adult EoE patients have decreased distensibility compared with control patients.

Researchers at our Digestive Health Institute sought to confirm that the EndoFLIP could be beneficial within the pediatric space as well.

Research methods: Using the EndoFLIP to study children with EoE

Researchers conducted observational studies at two pediatric hospitals, including Children's Colorado, to compare distensibility according to age and other clinical variables between children with and without EoE.

Eligible children were 3 to 18 years old and were undergoing upper endoscopy to evaluate symptoms or management of EoE.

The EndoFLIP measured lumen diameter and intraballoon pressure at stepwise balloon inflation. After taking the measures, the balloon was deflated and the catheter was removed. The endoscope was replaced and mucosal biopsies obtained. The primary outcome, distensibility, was defined by the minimal esophageal body diameter determined at maximal esophageal distensibility at an intraballoon pressure of 40 mmHg.

The performing physician recorded esophageal appearance prior to EndoFLIP using a validated esophageal endoscopic reference scale. Biopsies were obtained based on standard clinical practice and included esophageal, gastric and duodenal biopsies and examination by hematoxylin and eosin stain.

Out of the 88 EoE patients in the study:

Distensibility in EoE in relation to clinical variables

Patients with intermediate inflammation (5–15 eos/hpf) also had intermediate distensibility (mean distensibility 14.81mm (±s.e.m. 0.84), n=9). This was not statistically different between active or inactive inflammation. A history of stricture or food impaction, clinical dysphagia, fibrostenotic endoscopic features and presence of lamina propria fibrosis on biopsy were linked with decreased distensibility.

There was no association found between gender, dietary treatment or topical steroids treatment and distensibility in pediatric EoE patients.

Research discussion: EndoFLIP is a successful functional assessment  tool for children with EoE and may aide EoE treatment 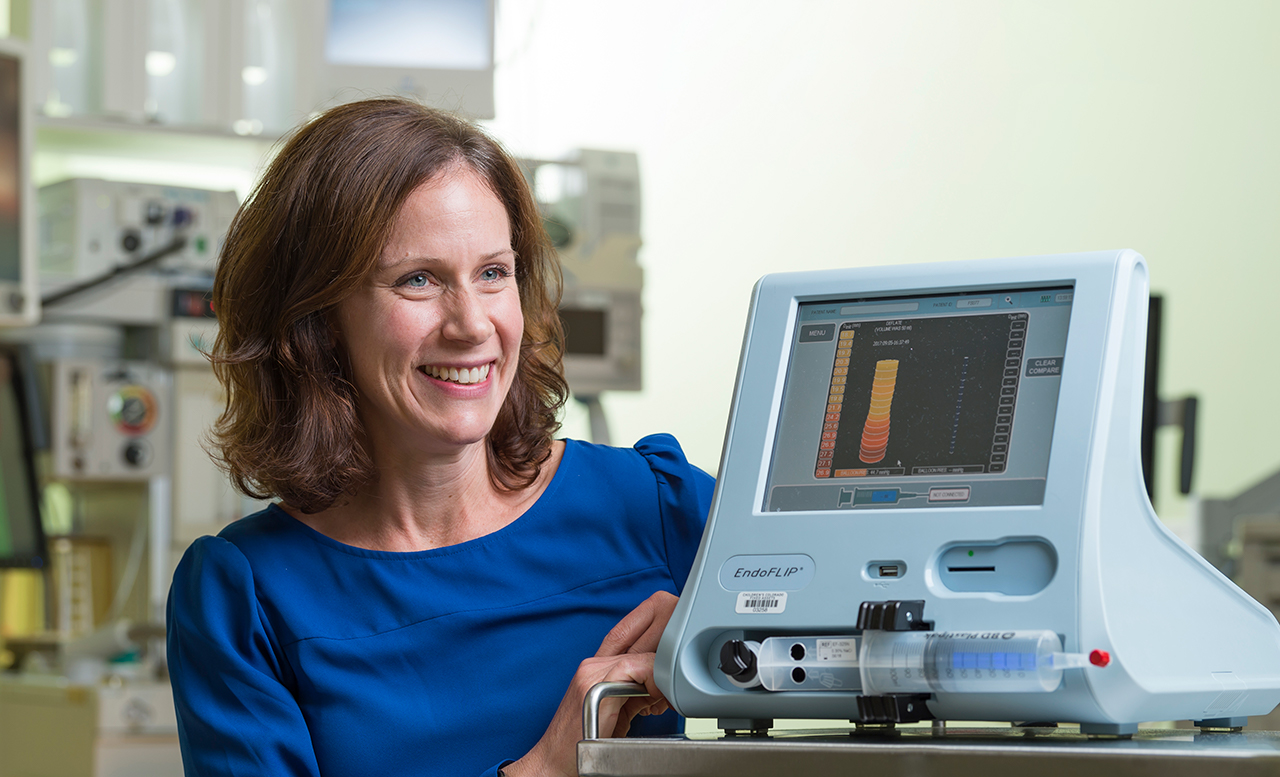 By using the EndoFLIP tool, researchers demonstrated for the first time that pediatric esophageal distensibility is significantly decreased in children with active EoE compared with children who do not have EoE.

Researchers also found that a number of factors, including increased eosinophil density (>15 eos/hpf) and lamina propria fibrosis, had a notable association with the altered function.

Children with a history of dysphagia, food impaction and stricture, as well as children with ongoing dysphagia showed decreased distensibility compared to EoE patients without the symptoms.

The data shows that the EndoFLIP can be successful when used in children and it is possible to provide information about esophageal distensibility in future studies.

Our researchers found that the EndoFLIP is a new tool for providing functional assessment of EoE in children and could lead to improved prevention and treatment of swallowing dysfunction.

The study was published in the May 16, 2017 issue of the American Journal of Gastroenterology.