The Future of CAR-T Cell Therapy

Learn more about hematology and oncology at Children's Colorado, and how we can help you improve your practice.

From a treatment perspective, the chemotherapy regimen for acute lymphoblastic leukemia, or ALL, is impressively effective.

"It's got a cure rate of 85%," says pediatric hematologist and immunologist Terry Fry, MD, one of the world's preeminent investigators of cancer immunotherapy.

"To be clear, that's not remission. That's five years out. It is by all standards probably the most effective chemotherapy regimen out there. There are certainly unmet needs, but really we're doing pretty well. It's interesting that this field is where we've developed this new therapy."

That new therapy would be the CD19-targeted chimeric antigen receptor, or CAR, the world's first commercially available cancer gene and immunotherapy, approved by the FDA in 2017.

In trials, it achieved an astonishing 89% remission rate. That's in just 4 months of treatment, compared to the nearly 3 years of traditional chemotherapy ALL patients typically undergo — with none of the harsh, painful effects.

"Traditional chemotherapy is effective but toxic," says pediatric oncologist Michael Verneris, MD, another primary investigator of the CD19 CAR. "And in many cases, it's not effective."

"We're working on the guts of how the CAR activates the T cell."

As Director of Bone Marrow Transplant and Cellular Therapy at Children's Colorado, Dr. Verneris sees that firsthand — not just in the 15% of ALL patients chemotherapy fails, but in patients with worse prognoses: neuroblastomas, sarcomas, metastatic and secondary cancers. Even for kids cured, he's seen the scars chemo leaves in its wake.

Still, CAR therapy is not without problems. By a year out, the 89% remission rate drops in half. The modified T cells die off. Leukemia cells mutate to resist them. The cancer returns.

"We're working on the guts of how the CAR activates the T cell," says Dr. Fry. "We're using the patient's own cells as the material to make the CAR, and sometimes you get a bad cell. With CD19 you can overcome that in many patients. But once we start applying it to other cancers, the quality of the cell is going to be a real issue."

Dr. Fry is already working to apply it to other cancers. Acute myeloid leukemia, or AML, is a logical next step and his lab is developing a CAR to target CD33, a protein myeloid cells express. He'll be kicking off a multisite clinical trial starting at the National Cancer Institute and expanding to five other sites, including Children's Colorado, this year.

His lab also continues to expand its arsenal for ALL, aiming to improve durability. For that, they're rolling out novel CARs targeting both CD19 and CD22, as well as a cytokine receptor expressed on a high-risk subset of ALL known as TSLPR. Those trials, too, will kick off this year.

Meanwhile, Dr. Verneris's lab is on a mission to adapt CARs for solid tumors. They don't work for that currently, he says, because they can't penetrate tumors.

"You get a cut on your finger, there's 10 thousand things that happen," Dr. Verneris observes. Cascades of signals draw cells and agents to the area to destroy bacteria, stop the bleeding and close up the wound.

With manipulation, CAR cells could feasibly be programmed to co-opt those normal immune mechanisms to migrate toward and into tumor tissue. Those future CARs, says Dr. Verneris, may not be T cells. They may not even come from the patient.

"You could take them right off the shelf," he says.

Those next-generation CARs, Dr. Fry says, will grow not from a single lab or even one institution, but out of collaborations that span the globe.

As part of the Pediatric Cancer Dream Team, Dr. Fry's lab works directly with the cancer genomics and immunology players pushing the front lines of treatment. And as a Cancer Immunotherapy Trials Network site, Children's Colorado will bring those new developments to the clinic.

"Right now it's largely hub and spoke. This work will help set up smaller pediatric hospitals that just don't have the staff at the moment to deal with the massive amount of regulation."

Drs. Verneris and Fry will also be a part of bringing those new treatments, including CD19, from academic supercenters like Children's Colorado to the patients who need them, wherever they are. Working within a consortium funded by the National Institutes of Health and the Clinical & Translational Science Institute, they're working to help smaller centers get CAR therapies online.

"Right now it's largely hub and spoke," Dr. Verneris says. "This work will help set up smaller pediatric hospitals that just don't have the staff at the moment to deal with the massive amount of regulation."

Brian M. Freed, PhD, drops a heavy binder on his desk. Its contents: about 800 pages of standard operating procedures for cell handling at ClinImmune, a transplant immunology lab just across the Anschutz Medical Campus from Children's Colorado.

As a facility that collects, processes, stores and matches stem cells used in bone marrow transplant for institutions all over the world, ClinImmune has infused cell products into thousands of patients. As its Executive Director, Dr. Freed is well familiar with the kind of paperwork that requires.

"This is one of three volumes," he remarks.

Infusing cell products into humans, on a procedural level, is incredibly complex. It requires a rigorous precision of equipment and expertise. That's particularly true for the manufacture of CARs.

"It's a patient-specific drug, there's HIV-based vectors and it involves genetic engineering," says Dr. Fry. "These are the components that make people nervous."

Located next door to ClinImmune, the Gates Center for Regenerative Medicine has been a leading stem cell research lab for more than a decade. Given that experience, the Gates Biomanufacturing Facility had good bones for Good Manufacturing Practice, or GMP, as it's known. They had the right equipment and facilities, and they had many of the right people.

What they lacked was the regulatory infrastructure, which involves paperwork — and people with the training to do it — on a mind-boggling scale. For that, they collaborated with ClinImmune, a lab intimate with cell-infusion's many regulatory demands.

The regulatory demands of cell therapy

"If we infuse one of these products into a patient and 30 days later there's some adverse event, we want to know why," notes Tim Gardner, Gates Center's Chief Financial and Operations Officer. "Then we can look at the documentation and know everything there is to know about how it was manufactured: the humidity level in the room, the particle count, the people, the practices, the equipment, when it was last maintained and how. We have one person documenting for every person doing."

With five cell therapy suites, each of which can run different products, the Gates Center has capacity to do a lot. They'll produce cells for innumerable novel CAR therapies. Some of them — novel CARs targeting CD19 and CD22, another for CD33 and another for TSLPR — will come online in trials just this year.

"Our job is to set up a platform to allow efficient transfer from research to clinic," says Ryan Crisman, PhD, Gates's Director. In collaboration with Dr. Fry, Gates is positioned to manufacture cells for a wide array of future trials.

This year, they'll make CD19 for a trial that seeks to expand access to commercial therapy. As it stands, patients must have competed their first chemotherapy regimen, relapsed, and undergone and failed yet another round of "salvage" chemotherapy before they're eligible. Dr. Fry wants to see CD19 move up to the first relapse — maybe even, eventually, up front.

"We took all the time we needed to get this facility to the point where they could support multiple human trials," says Dr. Fry. 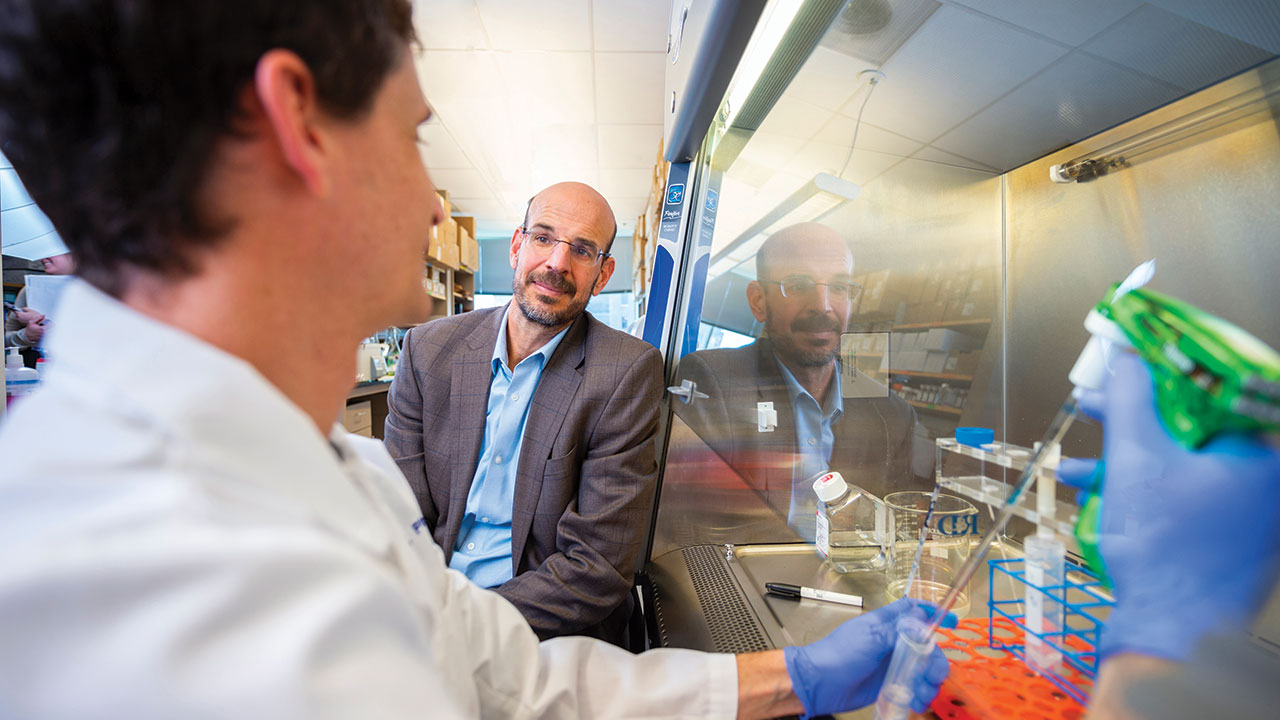 "We want to do it right. We're not satisfied with just getting by."

It'll take smart, driven, creative people working together across institutions to realize that goal. But perhaps most of all, says Dr. Fry, it will take the happy accidents those relationships afford.

"We come up with our ideas in the lab, but the best ones come from conversations in the hallway with someone not at all involved, who thinks completely differently than we do and asks a question we've never thought of asking," he says. "And that leads to a collaboration, which leads to the next breakthrough. That's always how it goes."