Learn more about pulmonology at Children's Colorado, and how we can help you improve your practice.

As of now, there's no standard form of imaging for both the structure and function of the lungs. A CT scan can tell you, say, if a patient with cystic fibrosis might have air trapping, and where. But it also exposes the patient to about two years of background radiation, and it can't tell you anything about airflow or capacity. Spirometry can do that, but it can't tell you much about blockage. And if the patient is younger than about 6 years old, it can't tell you much of anything, at least not accurately.

"You could do pulmonary MRI, but that's a lot of equipment, people and computing power, and it's expensive," says Emily DeBoer, MD, a pediatric pulmonologist at Children's Hospital Colorado specializing in biomarkers of lung disease. "Most centers don't do it. And most kids under 6 still can't tolerate sitting still that long."

"We get worried about doing frequent CTs on younger children," says pediatric pulmonologist Jordana Hoppe, MD. "But we need way to get information to tell us how we're doing treating kids with cystic fibrosis. Are they getting better? Is this or that treatment making a difference? There aren't a lot of options to understand lung disease in the preschool-age range."

That's about to change.

Mapping the lungs through conductivity

Different tissues conduct electricity differently. Blood is a great conductor. Bone, not so much. Air-infused lung tissue, even less.

"As current flows through tissues, it takes the path of least resistance," says Jennifer Mueller, PhD, Professor of Mathematics and Biomedical Engineering at Colorado State University. "The idea is that we can measure that and use that data to map what's inside the body."

As an idea, electrical impedance tomography, or EIT, has been around for a long time. Electrical engineer John G. Webster first detailed it in 1978. Computer scientists and medical physicists produced the first working cross-section of a human forearm in 1983. Now, Dr. Mueller is collaborating with Dr. DeBoer and others at Children's Colorado to develop that technology for the clinical space.

"The way it works is that you have these measurements and you're trying to figure out what causes them, to find the cause of an effect," says Dr. Mueller. "That's called inverse problem. And it's a difficult one."

You solve for the unknowns using equations derived from Maxwell's laws, a set of mathematical models that describe electrical fields — the same ones that power technologies like generators, radar, electric motors and wireless communications.

Iterative algorithms then solve the governing equations to produce what's called a candidate distribution, essentially a guess at how conductivity is distributed within the field, with the goal of matching the inputs to the outputs. The algorithm will then adjust the variables and run the equations again and again until it gets within a margin of error.

The potential of EIT for cystic fibrosis

"You can see where air and blood are going," says Dr. DeBoer. "Breath to breath, beat to beat."

"You're going from hundreds of measurements on the outside to thousands of pixels inside," says Michelle Mellenthin, PhD, a post-doctoral fellow in biomedical engineering at the University of Colorado School of Medicine who, as a graduate student of Dr. Mueller's, built a prototype EIT device. "The math is incredibly complex."

Dr. Mueller has been working on the math, specifically inverse problems for medical imaging, for 20 years. Until recently, that work was confined to the lab. She was giving a talk on EIT's potential in cardiac imaging when she met Robin Deterding, MD, Chief of Pediatric Pulmonary Medicine at Children's Colorado.

"That was my first clinical project," says Dr. Mueller. "Before that I was only looking at healthy subjects, looking at ventilation and perfusion and refining the algorithms. I wasn't satisfied doing that. I wanted to make a clinical difference. I was looking for a partner." 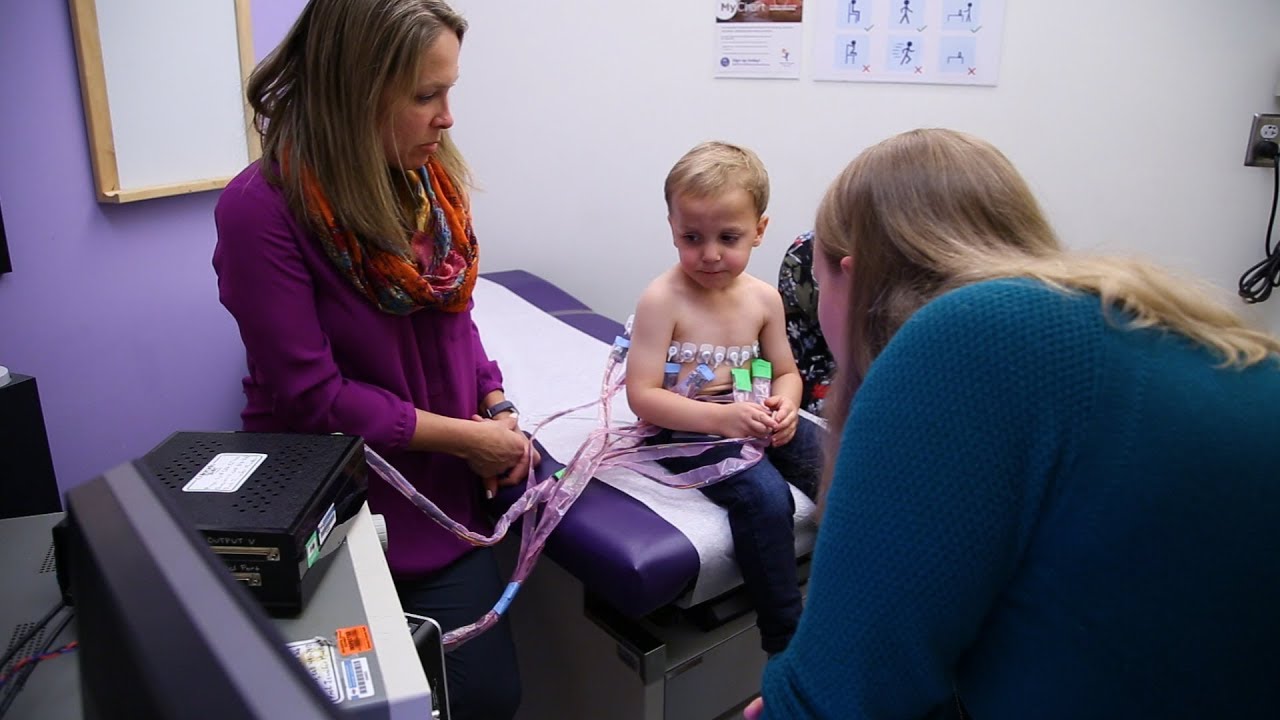 Dr. Mueller found that partner in Dr. DeBoer, who had a research interest in pulmonary imaging. When she saw Dr. Mueller's animations — the lungs in cross section, filling and emptying of blue, the heart pulsing red — she knew she was looking at potential.

"It's very exciting," Dr. DeBoer says. "There's no radiation, no sedation. It's very safe. You can put it on a baby, you can put it on an adult. We're doing studies in the ICU and the OR. You could even do studies at home."

Indeed, Children's Colorado is already testing EIT in several patient populations. It could help treat regional pneumonia, a common comorbidity of neuromuscular disease. In the NICU, it could help manage bronchopulmonary dysplasia. It could help treat patients on mechanical ventilation and young children with asthma. It can reveal aspects of heart function, blood flow, fluid accumulation in the lungs. It can show the boundary between living and dead tissue. It can show regions of lung collapse and of hyperinflation.

"Our goal is to use it all the time, routinely, over a period of three years. If it works, it can go everywhere."

Precision electronics you can bleach

To some degree, almost everything conducts electricity. There's a tiny amount of current passing between you and the cell phone in your pocket right now, for example. Not that you'd ever notice.

But when you're working with imperceptible amounts of current like those used in EIT, you notice.

"The hardest, biggest challenge of bringing EIT to clinic is that you have interference from other electronics in the room," says Dr. Mellenthin.

Even in a lab setting, measurements of perfusion are just barely above the level of noise. In a hospital, where any number of instruments and monitors might exchange current with the leads strapped to a patient, isolating those measurements is difficult, to say the least.

There are elements of circuit design Dr. Mellenthin can arrange to filter out some of that noise. It's an iterative process. The downside, though, is that the filters inevitably compromise sensitivity.

"You have these conversations over and over again," she says. "What can we get away with in terms of noise that makes images good and the device functional? Mathematicians want to prioritize data quality at all costs. On the other side, you have clinicians who actually need to use the device."

And electrical noise is far from the only problem the clinic presents. Electrodes don't like to stick to a sweaty patient. Salt content can throw off the readings.

The machine that works has to strike a delicate balance: precise enough to be accurate, robust enough for the unforeseen. Oh, and you have to be able to clean it with bleach.

"One surgeon I brought it to, the first thing she said was, 'Okay, what if a patient throws up on it?'" Dr. Mellenthin laughs. "They don't teach you that in engineering school."

Refining EIT for the clinic

In its current iteration, EIT is not particularly user-friendly. Dr. Mueller travels with the device and helps set it up and gather the data. She processes it afterward, in her lab. Then she sends the images to Dr. DeBoer for analysis. That's not ideal.

Direct algorithms, first used clinically by Dr. Mueller's team, solve several complicated equations in one step to produce an image in real time. In a new collaboration with GE Global Research, Dr. Mueller is developing that group's prototype into a highly-portable, hospital-friendly system that can do just that, in a configuration easy enough for a nurse to set up.

Then there are the inherent challenges of testing a novel medical device.

"It's definitely learning on both sides," says Dr. DeBoer. "Dr. Mueller could say, 'This signal is abnormal, what do you think it means?' And then we have to go back and try to figure that out. There aren't many studies — maybe any studies. We're certainly the biggest group in cystic fibrosis."

And in some ways, it's the sheer number of people involved and their expertise that makes the difference. It's engineers and pulmonologists, cooperation between institutions, partnerships with industry. That's what it takes.

"It's difficult to validate," says Dr. Mueller, "when you're seeing things that haven't been seen before."