Bariatric Surgery and the Progression of Type 2 Diabetes in Teens

Learn more about bariatric surgery at Children's Colorado, and how we can help support you and your patients.

Bariatric surgery isn't the most intuitive treatment for type 2 diabetes, particularly in teens. It's a major surgery, after all, and there are far less invasive treatments. But an increasing amount of large-scale, long-term evidence suggests that, for many, it's the most effective treatment out there — and the younger they get it, the better.

Mona Ramos was always active. She ran track and field and played softball in high school, all four years. She loved hiking and the outdoors. She worked on her feet and did well in school, and so what if she also loved Starbucks and Hot Cheetos? She liked how she looked. Lots of people did.

"My mother, her grandmother, she always tells Mona how beautiful she is," says Liz, Mona's mom. "She's like, 'You've got to embrace those curves, mija.'"

But when Mona started gaining weight at age 15, Liz worried. She'd been overweight herself. She'd had the sleep apnea and type 2 diabetes that came with it. Mona's grandmother had diabetes, too. So did her grandfather and three of her aunts.

It got worse after graduation. Without the structure of sports, Mona would go to the gym every now and then, but it wasn't much fun. She'd give up soda or Starbucks. She even tried Weight Watchers. She'd lose a few pounds, but then her weight would level off and she'd get discouraged. A sleep study turned into a CPAP machine. Her blood sugar climbed to pre-diabetic levels.

"Teens appear to have a metabolic elasticity that allows them to reverse certain obesity-related health conditions to a greater extent than adults."

The vicious cycle of adolescent diabetes

It's a familiar story in the U.S., particularly among minority populations. For Hispanic youth like Mona, the rate of diabetes is about 17% of the total population. For Native Americans, the rate approaches half. And as studies follow these kids over time, the outlook grows increasingly grim.

Mona was headed down that path. At age 19, she couldn't spend five minutes walking without getting tired. She'd sweat just shopping for groceries. For a girl who prided herself on being active, it was embarrassing. She got depressed. And the depression led to more weight.

Liz had been there. She'd gotten bariatric surgery, as had Mona's three aunts. It helped a lot. But when it came to Mona, her family was split on the issue. She seemed too young. Her grandmother didn't think she should do it. Neither did her brother.

But as intuitive as that solution sounds, it doesn't have a great track record. TODAY's lifestyle intervention failed to yield statistically significant results.

"Even with intensive medicinal therapy, diabetes in teens tends to get worse over time," says Associate Surgeon-in-Chief Thomas Inge, MD, national primary investigator of Teen-LABS, the first long-term study of bariatric surgery in adolescents, published in JAMA Pediatrics in 2014. "That's what TODAY showed."

A dim outlook for teens with prediabetes

Before TODAY, there was no consistent course of treatment for kids with type 2 diabetes. Pediatric providers sporadically treated with metformin, although nobody knew what that would look like long-term, and rosiglitazone had just hit the market. TODAY tested both. Neither performed as expected based on the adult literature. Metformin had a failure rate of 13% in adults. In kids it was more like 50%.

"And failure meant we couldn't manage them with oral medicines. They had to go on insulin, and then you have shots, checking blood sugar multiple times a day. It's more expensive. There's more risk," says pediatric endocrinologist Kristen Nadeau, MD, MS. "So the thought was, well, maybe TODAY intervened too late. Maybe you can't even wait until diabetes sets in. So we recruited kids with less than 6 months of diabetes, and another half with prediabetes."

That work became the RISE study, for which Dr. Nadeau has served as national primary investigator. She and her multicenter peers knew teens were more resistant to insulin because of the hormonal environment of puberty. RISE's latest results from August 2018 show that youth have lower insulin sensitivity compared with adults.

If you could give those overtaxed beta cells a rest early, they hypothesized, maybe you could improve their function. In August 2018, RISE also published their findings from one group on 12 months of metformin and another on 3 months of insulin, followed by 9 of metformin.

"These kids' maximal beta cell response actually got worse on treatment," says Dr. Nadeau. "Some of the kids, their blood sugar got so high they couldn't even come in for the last measurement."

For some kids, beta cell response will get better when they grow out of puberty and their insulin resistance ends. But for about half of the kids in TODAY, that beta cell function never came back.

Read all of the latest research findings from the RISE consortium on PubMed.

As an adult gastroenterological surgeon in the late 1990s, Dr. Inge performed bariatric surgeries on adults long before almost anyone would perform one on a teen. Dr. Inge's first, during his first year of pediatric practice, was an extreme case: an adolescent weighing 400 lbs. with obstructive sleep apnea so severe his otolaryngologist and pulmonologist were considering a tracheostomy. But because of the thickness of the patient's neck, they feared that, too, could threaten his life.

Knowing Dr. Inge had experience with bariatric surgeries, they asked if he'd consider their patient. At the time, and even today, it was seen as a risky and potentially controversial proposition. Just a handful of publications described it. Longitudinal research was non-existent. Dr. Inge saw an opportunity.

Most than a decade after first enrollment, Dr. Inge and his group are still following more than 200 participants — at better than 85% retention rate. They achieved it, Dr. Inge says, by making it easier for participants to stay in touch, through supports like travel assistance and even home visits.

They've amassed more information on adolescent bariatric than any other group in the world. And what they've found, in new and forthcoming research, is nothing short of revolutionary.

The special benefits of bariatric surgery for teens with diabetes

"Teens appear to have a metabolic elasticity that allows them to reverse certain obesity-related health conditions to a greater extent than adults," says Dr. Inge. "Both age groups experience the same relative weight loss, but teens have a better response for diabetes and hypertension, and these advantages occur with little additional risk."

Compared side by side, teens enrolled in Teen-LABS did better than TODAY-enrolled teens in almost every conceivable measure. In fact, at baseline, teens in the surgery group started off heavier and with worse glycemic control — but by two years out, the surgery group had better hemoglobin A1c, lower blood pressure and less dyslipidemia, plus weight loss of nearly 30%. Most TODAY participants saw none of those improvements. In fact, they were nearly uniformly worse off. That comparison study appeared in JAMA Pediatrics last year. 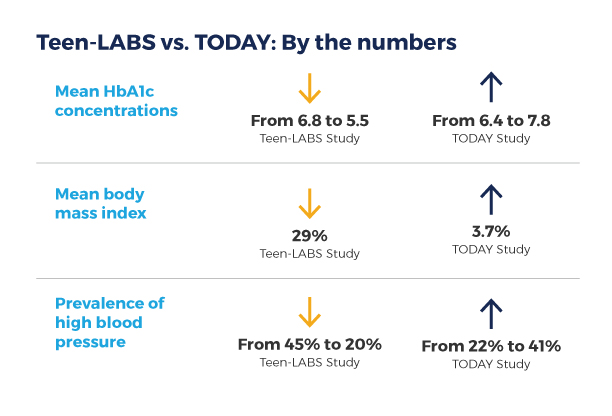 "My guess is if we followed the TODAY group out another ten years we'd perhaps find more heart attacks, amputations, infertility, blindness and renal failure," says Dr. Inge. "We've only scratched the surface in telling the story of these individuals. When you look at the surgery group, my suspicion is we're going to find a higher quality of life."

"It's a pretty convincing argument for bariatric surgery as being, at least for now, the most effective treatment we've got," says Dr. Zeitler. "A lot of people have come around from seeing it as a last resort to something we should be talking about with these kids from the beginning. The next step is to figure out a way to bottle the benefit of surgery, reversing the progression of disease, without the invasiveness. Could you put that in a pill, for example."

Exploring the mechanisms of adolescent diabetes

Currently, Dr. Zeitler and his team are studying just that, using data from TODAY to better understand the underlying mechanisms of complication in diabetes, particularly long-term effects on cognition. Meanwhile, Drs. Inge and Nadeau are working on a funding proposal to study the biological mechanisms of bariatric surgery, including pancreatic and gut hormone function, as well as measures of cardiovascular and liver health.

And work remains to be done in the bariatric population. Kids who have the surgery may see complications down the road, such as iron deficiency and problems with bone health.

For the time being, though, surgery was Mona's best option, and she ultimately decided to do it. It's not quite what she thought it would be. She knew she wouldn't be able to eat like she did anymore, but the change is drastic. She can't eat two bites of a hamburger. Even drinking too much water at once makes her feel full.

"It's a pretty convincing argument for bariatric surgery as being, at least for now, the most effective treatment we've got."

But she lost 10 lbs. just following the surgery prep recommendations, and she's been losing about 10 lbs. a month ever since. Dr. Inge thinks she'll lose 85 lbs. before she's done. And that hope makes the difference. She's back to hiking. She hits the gym every day. Last month, she even did the Manitou Incline, a grueling gain of 2,000 feet in less than a mile along an old washed out funicular track on a mountainside just west of Colorado Springs.

"I was tired, but I did it," she says. "That felt really good. I know if I didn't have the surgery, I wouldn't be able to do half the things I'm doing now."