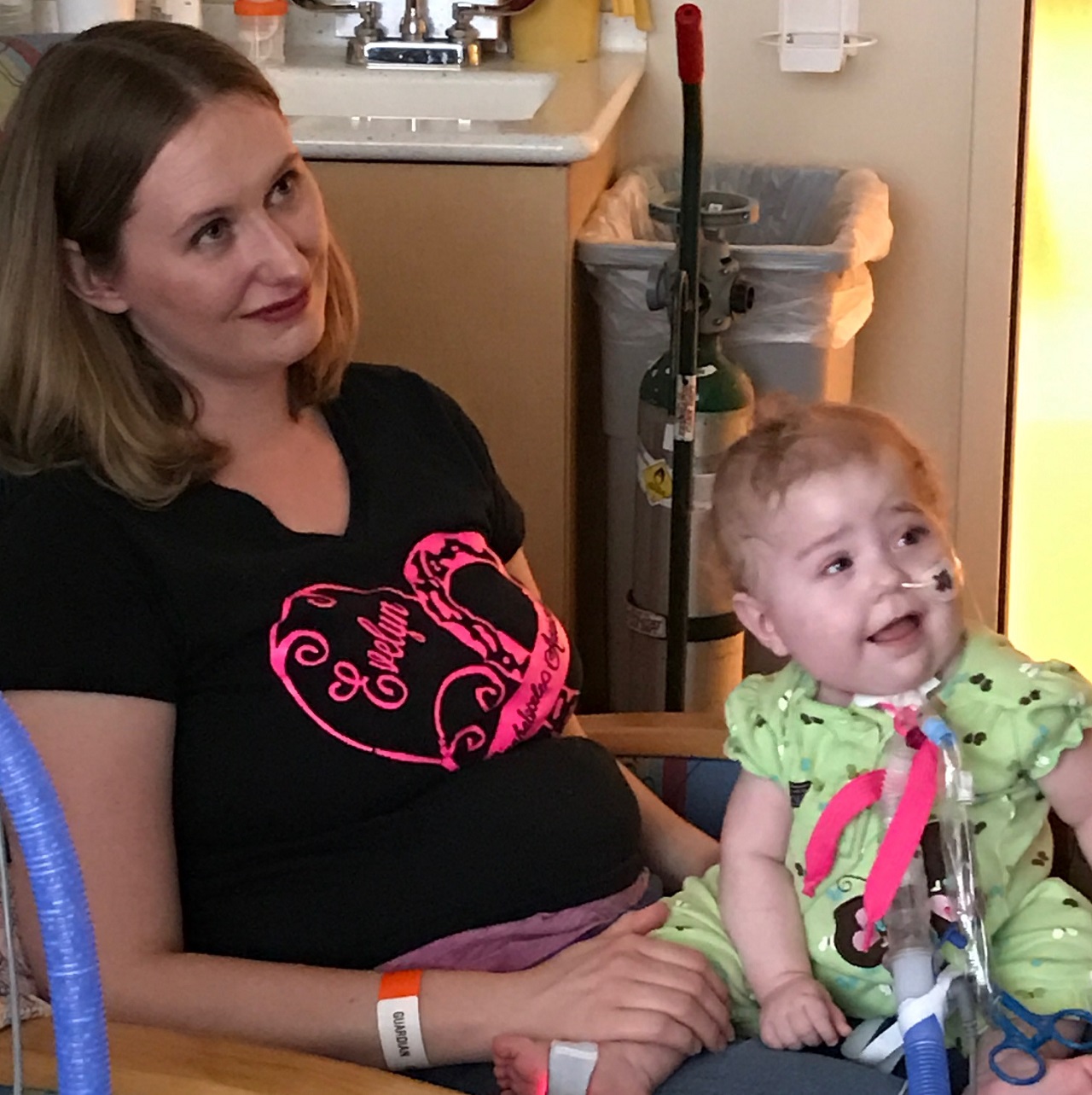 Evelyn Steppig was born with a condition called omphalocele, a birth defect of the abdominal wall. She spent the first eight months of her life at Children’s Hospital Colorado, with seven of those months in the Neonatal Intensive Care Unit (NICU).

“We wouldn’t have gotten where we are without the amazing staff in the NICU. They love her like she’s their own,” said Salem Steppig, Evelyn’s mom.

When Salem was just 13 weeks pregnant, an ultrasound detected a fetal anomaly. At 16 weeks, after more tests, doctors discovered that the baby had a giant omphalocele, a condition in which her bowels, liver and part of her stomach were growing in a sac on the outside of her body.

After much soul searching, Salem and her husband Harlan realized that it all would work out and that they were going to enjoy the time they could have with their daughter. They also felt lucky to find out this information early enough to process and to learn how to best take care of their precious baby.

The Steppigs met with several fetal experts, including Kenneth Liechty, MD, Co-Director of the Colorado Fetal Care Center and Michael Zaretsky, MD, Medical Director of the Maternal-Fetal Care Unit, who reassured them they were in good hands.

Salem was scheduled for a cesarean section, but because she ended up in early stages of labor and the doctors knew labor would endanger Evelyn, they delivered earlier than expected. Evelyn arrived at 35 ½ weeks and, unexpectedly, the sac holding her organs ruptured – which meant she needed surgery immediately to start putting her organs back into her body.

“She was born with all her organs on the outside because her personality was too big to fit them all inside,” Salem now jokes.

A little girl with enormous strength

Evelyn went on to have seven surgeries within three weeks to enclose her organs.

After Evelyn’s organs were placed inside her midsection, there wasn’t enough room for her lungs to easily develop. The day before Thanksgiving, she went back into the operating room to be fitted with a tracheotomy to help her breathe more easily. Even though Salem and Harlan were initially worried about this step, Evelyn blossomed. Without having to work so hard to breathe, her development and playfulness grew exponentially.

“She continues to surprise us all; she’s such a happy baby with such personality,” Salem said.

As Evelyn continues to grow, there will be more space her organs to develop at a more normally pace. She will have spinal surgery for her scoliosis, which also developed before birth, along with the removal of her trach, around 2 years of age.

“Hopefully, by the time she’s 3 years old, you’ll never be able to tell that any of this had ever happened,” Salem said.

Newfound hope for their family

With a new approach to life, Salem and Harlan know it is going to be alright. “We just take every day as it comes and look at things with humor,” said Salem.

Evelyn “has great parents who are very involved in her care,” Dr. Liechty said. “To have parents that are that involved has really helped her.”

The Steppig family credits the doctors, nurses, respiratory therapists and staff in the NICU with keeping Evelyn alive, healthy and happy.

“They loved our daughter like she was their daughter,” said Salem. “You don’t realize how much you need this hospital until you actually need it; we are so lucky to have this in our backyard.”

One of the nurse practitioners, Faith Fisher, was particularly helpful. “Not only did she take the time to care for Evie with complete dedication and attention to detail, but she also explained everything she was doing and why. Faith also never missed an opportunity to teach us, talk with us and get to know us beyond being ‘Evelyn’s parents’.”

Salem found amazing support through a Facebook group called MOO – Mothers of Omphalocele. She encourages people to find support groups for whatever difficulty they are facing. It is always good to know you’re not alone.