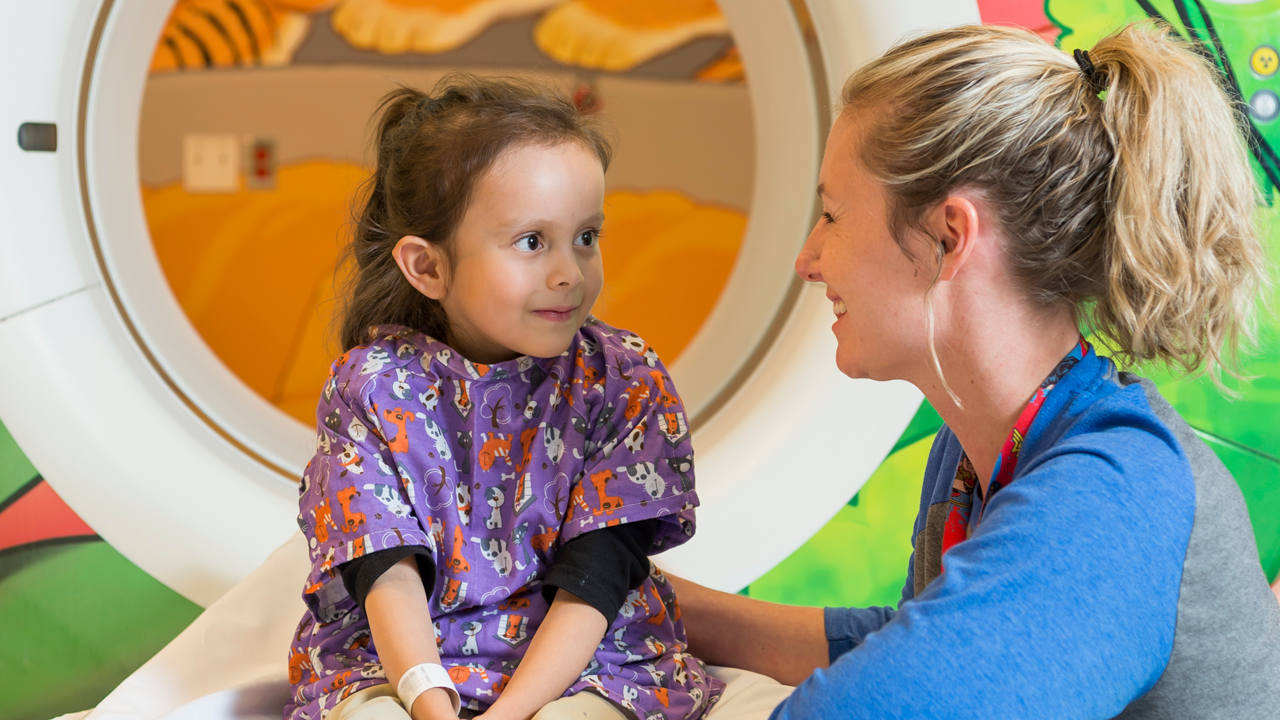 Say a child falls out a second-story window. She didn't lose consciousness, but her leg is bent where it shouldn't be — it's obviously broken. Her dad drives her to the nearest emergency department, where they perform a full-body CT scan in three seconds.

"It's fast," says Kari Hayes, MD, a pediatric radiologist at Children's Hospital Colorado, "But just because it's fast doesn't mean you should do it."

The problem with full-body CT scans for kids

The problem is that it might not be the right information.

"We see kids all the time who got a full CT and didn't need it," says Jason Kotas, Manager of EMS Outreach and Education at Children's Colorado. "And a lot of times, we can't even use the scan."

A radiologist without pediatric training might choose to scan the patient who'd fallen out the window with contrast — an injected fluid that makes the blood light up.

That would show a lot about internal bleeding, but because of the way blood flows in the brain, it would obscure the nuanced information needed to assess brain injury — which would be the main reason, in this situation, to do a CT scan at all. Dr. Hayes estimates about 40% of the images she receives from non-pediatric specialists are ordered incorrectly.

"In this case, a head CT would be warranted, since this child's fallen more than three meters," she says. "But she doesn't need that spine CT, doesn't need an abdomen CT. She just needed a head CT and a leg X-ray, but instead she got $50,000 worth of workup and all that radiation."

Like all radiation, X-ray damages DNA. And when DNA is damaged, one of three things may happen:

An X-ray (for kids and adults) exposes a patient to a couple of days' worth of background radiation — about the amount of environmental radiation they're likely to absorb on any given day. A full-body CT, depending on how it's calibrated, may expose a patient to more than a year's worth.

In a 50-year-old, that increased cancer risk is negligible. Adults' cells are not reproducing quickly — and even if they were, any chance of cancer would be a few decades down the road. In children, though, whose cells are dividing much faster, the risk is real.

"To be clear," says Dr. Hayes, "there's no specific amount of radiation that causes cancer. We estimate we're increasing a kid's lifetime chance of cancer by about a tenth of a percent with a full-body scan. But if we don't need to expose you to that risk, why do it?"

The importance of pediatric specialization for pediatric radiology safety

"Kids have different issues than adults," says Ashley Balakas, EMS Outreach and Education Coordinator at Children's Colorado. "Pediatric doctors and nurses are trained to recognize them."

A pediatric trauma doctor, for example, would likely know the diagnostic protocol for a kid who'd fallen out a window, at that child's age, with that child's symptoms. They'd be equipped to order targeted tests, rather than casting the wide but imprecise net of the full-body scan.

"It's as simple as just getting them to sit still for an X-ray so you can read it," says Balakas. "We're trained to be that comforting voice in their chaos. That's more than giving them a sticker. It's the art of distraction. It's communicating in a way that's developmentally appropriate, explaining procedures in a way they can understand."

The right treatment for the right (pediatric) condition

"If you're having a heart attack," says Kotas, "you don't want a foot surgeon. It's no different for kids."

Just like feet aren't hearts, kids are not adults. Where adult diseases tend to be the result of many years of exposures, kids' diseases tend to be ingrained in their genes. Kids' bones are softer and more pliant, meaning trauma affects them differently. They have different vitals. Their breathing is faster and shallower. Their hearts beat faster. For pediatric specialists, all those differences make up what it means to care for kids – they are the backbone of their pediatric training, which typically requires an extra year of education.

Kids also can't communicate the way adults can, meaning pediatric doctors rely on different methods to diagnose. Treatments look different. The tools are different. One study estimated only about 7.2% of emergency departments in the U.S. have all the needed pediatric supplies (.pdf).

Why it's worth the extra drive for pediatric emergency care

"There's a higher rate of medication errors in children cared for at non-pediatric centers versus pediatric-specialized ones," says Joe Darmofal, Director of Transport and EMS Outreach and Education at Children's Colorado. "Depending on where you go, the rate of errors in pediatric resuscitation can be as high as 50%."

Take respiratory syncytial virus, or RSV, a common respiratory infection. In adults, it looks like a cold. In infants, because of their smaller airways, it can look and sound a lot like an asthma attack. But asthma is rare in infants. A pediatric doctor would be much more likely to make the right diagnosis — and apply the right treatment — before the situation got serious.

"It's calming the kid down so they're not screaming and flailing, so you can get the IV in on the first try and not have to poke them a bunch of times," adds Kotas. "There's a lot of background knowledge that allows those interactions to go smoothly."

Summer doesn’t officially start until June, but parents know it really starts when kids get out of school. Learn how to keep your kids safe this summer.

Our Injury Prevention Program Manager identifies a few of the major trouble spots for traumatic injuries and how to steer clear.